For UV-VIS optical system, there are four different types in the market：single beam, split beam, double beam and double monochromators. 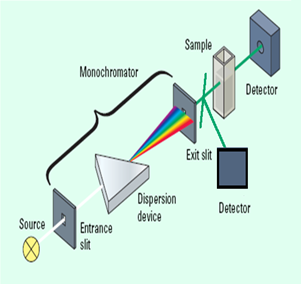 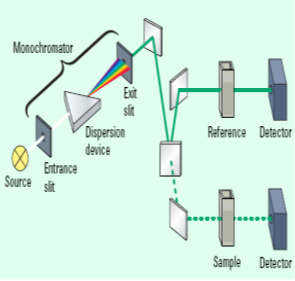 Single beam: single beam is simplest optical system of UV-VIS, the whole light from monochromator through the sample to detector.

Split beam: the light from monochromator is split in two parts, one beam is through the sample to detector, another beam directly arrives at detector, this beam is reference beam.

How to affect the test result?

For single beam structure, the optical structure is simple and low cost, all light from monochromator is through the sample to detector, but this optical system can’t eliminate the affection of light source fluctuation and electrical noise, sample absorbance changes now and then.

For split beam structure, because of the reference beam, its optical system can eliminate the affection of light source fluctuation and electrical noise, better than single beam, such as PERSEE’s T6 and T7 are split beam optical system.

For double beam structure, real sample and real reference can be tested simultaneously, this structure can eliminate affection from light source fluctuation, electrical noise and sample blank, meanwhile the structure is more complicated than others, some high level products use chopper to separate beam as sample beam, reference beam and dark beam, this design guarantees the beam with more energy and higher test sensitivity, such as PERSEE’s T8 andT9/T10 UV-VIS.